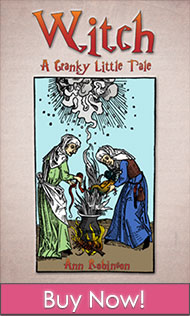 Witch is alternately narrated by Irene Richards, 64, and her daughter, Shirleen McClure, 35, as they cope with events and each other during one year beginning and ending on Halloween. In a comedy of errors, Irene completes a mail-order course in witchcraft, enlisting the aid of a 12th-century sorceress, Moldred of Breste, to enact revenge on her unfaithful husband, Teddy, who is recuperating from a stroke. Although Irene perceives her daughter as an adversary, Shirleen is only trying to help her mother adjust to the vicissitudes of aging while dealing with her own early midlife crisis.

Moldred shares her anti-aging formula, inspiring Irene to forget her vendetta and develop Forever Young, the bogus bubble bath that will make her famous. When customers discover the ruse, a repentant Irene seeks solace in a Neo-Pagan lifestyle, but soon becomes disenchanted with life in a coven. She forgives Teddy, who has recovered his health and become a caterer.

The story concludes with the Wiccan marriage ceremony of Irene’s grandson, Junior, and his pregnant girlfriend, Antoinette, who is the daughter of Teddy’s former mistress. To everyone’s delight, their baby is born with midwife Moldred in attendance. At the novel’s end, Irene, having rediscovered the pleasures of traditional family life, contemplates a future without Neo-Paganism that might even include Teddy.

Introduction by the author:

Readers are sure to enjoy Witch’s light and dark treatment of life’s thorny issues—aging, jealousy, revenge, mother-daughter dynamics—and its gentle send-up of new-age fads. Editors have noted the following: Witch has more than its share of pleasures and surprises, is professionally and clearly written, represents an excellent concept of humorous contemporary fiction, is filled with engaging characters, is a stylishly funny novel characterized by assured pacing and an eye for the macabre. In 2005, the manuscript was a semi-finalist in the Peter Taylor Prize for the Novel competition. Buy now!

From the back cover of Witch

Ann Robinson has a genius for being funny and sad at the same time. Lust, love, mischief, malice, and madness with moments of tenderness and redemption—you’ll find it all in Witch, along with a wicked clever critique of three generations of an American family. The theme for Witch and perhaps for Robinson herself is expressed in a line from the book: ‘Beneath the dark is a layer of light that shines through every once in a while.’ Look for it, dear reader.
—Ernest Hebert, author of The Dogs of March and The Old American

What do we really know about our parents, children, spouses, lovers, friends, ourselves? How does any relationship survive betrayal? Ann Robinson explores these questions deeply and, in places, hilariously in this wild, intergenerational romp. Mother Irene (a newly hatched witch) and daughter Shirleen (her overwhelmed caregiver) get into tangles as real as eggs for breakfast and as fantastic as sudden wealth, the possibility of youth after sixty, and (even better) an appearance on Oprah. Witch is fun, funny, poignant, and impeccably written—line-by-line, caper-by-caper, heartbreak by heart-heal.

Set in an imaginary town in New York State’s Hudson River Valley in the mid-1990s, Witch is alternately narrated by sixty-something Irene Richards and her thirty-five year old daughter, Shirleen McClure. In a comedy of errors, Irene completes a mail-order course in the Craft, and enlists Moldred of Breste, a twelfth-century sorceress, to enact revenge on her unfaithful husband, Teddy. A reluctant Irene moves into daughter Shirleen’s house and cooks up recipes to die for. Along comes Rolfe, a handsome French-Canadian house painter/troubadour, and Shirleen is smitten…

Robinson’s short fiction appears in her collection Ordinary Perils (Peter E. Randall Publisher, 2002). Witch was written while the author was a graduate student in the MFA program at Vermont College, and then set aside to brew, snatching it from obscurity just as dear Moldred escaped from the twelfth-century. Born in New York City, Robinson moved to New Hampshire in 1967. She has written capsule reviews for Publishers Weekly and her stories have been featured on NHPR and published in Yankee magazine. Buy now!